Curators
FREE Nigerian Business Directory
✅ NEW - get your business listed and your information shared across social media.
Ad
The Senate Leader, Senator Ali Ndume, on Friday evening raised the alarm that if something urgent was not done, a war worse than the Boko Haram insurgency looms in Borno State and the North East generally. 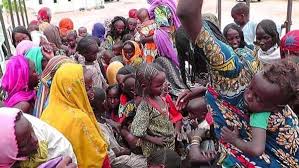 Ndume raised the alarm at a cocktail organised to mark the official inauguration of ‘Get Involved Initiative’, a pet project of the Wife of the President, Mrs. Aisha Buhari.

Ndume said Nigeria might have a larger crisis on its hands if all stakeholders failed to do something urgent on the malnutrition being experienced among children in the affected area.

He said about 500,000 children would die of malnutrition if something urgent was not done.

He said, “The situation in Borno State particularly in the North East and in the country as liberated generally is very very serious.

“If we do not do something concrete now on these children that are growing up malnourished, sick with hunger, poverty and malnutrition in Borno State, then we are going to have another war that is worse than the Boko Haram war.

“That is beside the people that are dying right now because of hunger in Borno State.”