Christmas Eve is the evening or day before Christmas Day, occurring on December 24 in Western Christianity and the secular world. Christmas Day is observed around the world, and Christmas Eve is widely observed as a full or partial holiday in anticipation of Christmas Day. Together, both days are considered one of the most culturally significant celebrations in Christendom and Western society.

Here are some facts, anniversaries, superstitions and traditions connected with Christmas Eve. 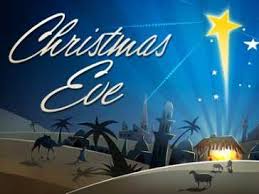 1. In the Middle Ages, Christians celebrated Adam and Eve on Christmas Eve.

2. On December 24, 1968, astronauts Bill Anders, Jim Lovell and Frank Borman read the Genesis account of the Creation as they orbited the moon.

3. Libya celebrates its Independence Day on Christmas Eve every year.

4. Italians celebrate the Feast of the Seven Fishes (a seven-course seafood meal) on Christmas Eve.

5. In Bolivia, they celebrate Misa del Gallo or Mass of the Rooster on Christmas Eve.

6. The Germans call Christmas Eve Heiligabend, (Holy Evening) when the pure in heart are meant to be able to hear animals talking.

7. The first performance of the carol Silent Night took place in the church of St Nikolaus in Oberndorf, Austria, on Christmas Eve 1818.

8. To deliver gifts on Christmas Eve to every child on Earth, Santa would have to travel 221 billion miles, spending .0002 of a second at each home.

9. Carol Vorderman and Ed Miliband are among the people who have birthdays on Christmas Eve.