Speaking at the presentation of the report, Nasir el-Rufai, governor of Kaduna and chairman of the committee, said when the recommendations are passed by the national assembly, “they will significantly rebalance our federation”.

Here are some of the recommendations made by the committee:

The committee recommended an amendment of the constitution to provide referendum to be conducted on “national or state issues”.

“We also propose a constitutional amendment to allow for a referendum to be conducted on burning national or state issues before decisions are taken,” he said.

“Right now, the constitution has no room for referendum, but only in the creation of states.”

The committee on restructuring said have the police at state and federal level would serve the interest of Nigerians better.

“Item six, police, we have also moved it to the concurrent list. we are recommending that police should be both federal and state,” the committee said.

The Kaduna governor said the committee proposed that there should be a state judicial council appoint and discipline judges in a state.

He said the National Judicial Council would only focus on federal judges.

“We have proposed an amendment to create the State Judicial Council that will appoint and discipline judges within a state while the National Judicial Council will exercise control over the appointment, discipline of judges of the federal government only,” he said.

The committee said based on the feedback it got from the people, it recommended fiscal federalism and the amendment of the federation account act to boost the income of states.

“We have recommendation on fiscal federalism and revenue allocation in which we propose amending section 162 and sub-section two of the Constitution; as well as amend the revenue allocation of revenue Federation Account Act to give more revenue to the states and reduce the federal government’s share of revenue,” the committee said.

El-Rufai said the committee recommended the creation of state court of appeal.

The committee proposed that the “state of origin” should be replaced with “state of residence to avoid discrimination.

“On citizenship, the issue of local government or state of origin is discriminatory and should be replaced with state of residence,” he said.

“It is around this that we have proposed an amendment to the Federal Character Commission Act to allow people domiciled in a place to be considered as indigenes.”

MINING OF MINERALS BY STATES

The committee also wants the mining of minerals and crude oil should be vested on states except where they are located offshore.

El-Rufai said the petroleum act would be amended to provide for states to issue mining licenses.

“We have proposed that mining, minerals, oil should go to the states. Then there will be certain constitutional amendments. The Petroleum Act will be amended to show that states can now issue oil mining licences; the Land Use Act, Nigeria Minerals and Mining Act, the Petroleum Profit Tax Act 2007 would all need to be amended,” he said.

“So, we have proposed amendment that will ensure that minerals, mining and oil are vested in the states except offshore minerals.”

“We believe widening the political space is consistent with APC’s and the President’s commitment and we have made recommendations but with very strict conditions. We have included in the bill to allow for independent candidacy that no one that wants to run as an independent candidate should not be a member of a political party six months to the election.”

LEGISLATING ON STAMP DUTIES BY STATES

El-Rufai said the committee recommended that stamp duties should be moved to the concurrent list.

He said the state would only be able to legislate on stamp duties for transactions involving individuals but not limited liability companies.

“We are recommending that legislation on Stamp Duties should be moved to the concurrent list but the state will only legislate on stamp duties only for transactions involving individuals and businesses but not limited liability companies that were incorporated by the government of the federation,” he said.

He said that the committee recommended that states should be able to have their own public holiday aside from that of the federal government.

The Kaduna governor said states were already declaring public holiday but it is unconstitutional.

“We want public holidays to be removed from the exclusive list to the concurrent list so that there will be federal public holidays for the entire country and then states can have their public holidays. This is already happening unconstitutionally,” he said.

“This will just make the actions of the state governments lawful and legal and avoid confrontations with the federal government on this subject.” 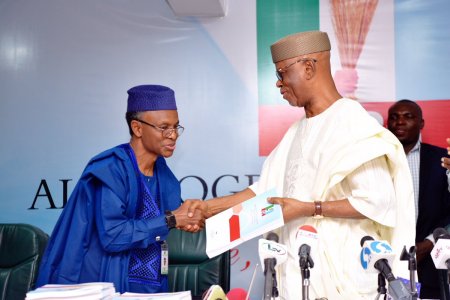 The chairman of the APC restructuring committee said states should be able to build prisons.

“We are recommending a reversal to the state of things as at 1966 but an additional responsibility is that the federal government will continue to have federal prisons while we have state prisons,” El-Rufai said.

He said having three tiers of government is an abberation.

The governor said states should be able to create and determine the size of their local governments.