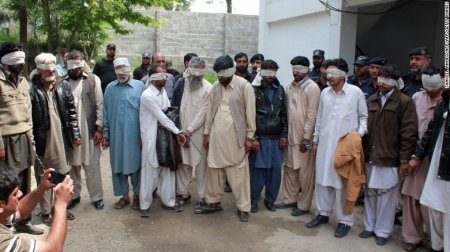 Ambreen, a 16 year old Pakistan girl have been choked, injected with poison and burned to death for allegedly helping a neighbour and her boyfriend elope. The Police in Abbottabad in Pakistan's northern Khyber Pakhtunkhwa province said the death was a so-called honor killing ordered by a tribal council after the teen helped with the ecsape.

More than a dozen people connected to the incident have been arrested.

"The order came after Ambreen's neighbor, Saima, had eloped with her boyfriend on the 22nd of April," police officer Khurram Rasheed said.

Rasheed said the girl's killing was ordered after a 15 member tribal council, or Jirga, gathered to investigate the elopement.

The couple that eloped has been tracked and is in a safe place, police said. They added that those arrested will be tried in an anti-terrorism court.

Pakistani police escort blindfolded suspects accused of killing and setting fire to a woman as they appear at a court in Abbottabad on May 5, 2016.