Seventeen people have been killed and a dozen injured in a “terrorist attack” on a restaurant in Burkina Faso’s capital, the government said Monday. 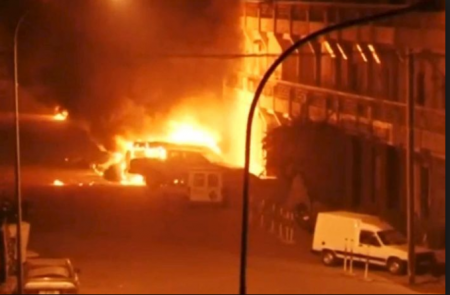 Witnesses said three gunmen arrived at a Turkish restaurant in a pickup truck on Sunday evening and opened fire on customers seated outside.

The government then launched a counter-assault, with gunfire heard into the night.

“A terrorist attack at Istanbul restaurant on Ouagadougou’s Kwame Nkrumah Avenue claimed 17 victims, their nationalities are yet to be confirmed,” a government statement said, adding that 12 people had been injured.

Communication minister Remis Dandjinou said it was not clear how many assailants were involved.

“They are confined to one part of the building they attacked. Security and elite forces are conducting an operation,” he said on television.

A paramedic told AFP that one of the victims was a Turkish national.

“We evacuated 11 people but one of them, a Turk, died on arriving at hospital,” the paramedic said, declining to be named.

Police evacuated civilians from the area before launching the counter-assault, with the heavy exchange of fire becoming more sporadic as the operation went on.