Confirming the incident in Uyo on Monday, the Police Public Relations Officer (PPRO) in the state, DSP Etim Dickson, told newsmen that the explosives were home-made.

Dickson, who said that the IEDs were likely produced by science students of the university, said investigations had commenced on the matter.

He assured the students on campus and parents not to entertain any fear about possible breakdown of law and order in the university community.

He said ``the incident has been properly taken care of, we urge students and employees of the institution to go about their normal businesses.''

The News Agency of Nigeria (NAN) reports that the IEDs were discovered by the campus security squad known as Operatives of Peace on Campus Initiative (PCI).

The Anti-Bomb Squad of the Nigeria Police had on arrival at the students’ hostel defused the two improved explosive devices and conducted a search round the other hostel rooms. 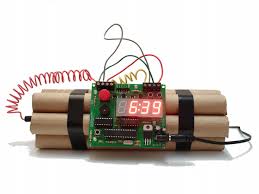 Lequte said:
The police command in Akwa Ibom said it had detonated two Improvised Explosive Devices (IEDs) found in the male hostel of University of Uyo (UNIUYO).
Click to expand...

Whoa. Wait. Did they detonate or defuse the bomb?
L

Vunderkind said:
Whoa. Wait. Did they detonate or defuse the bomb?
Click to expand...