Two female suicide bombers were on Saturday morning intercepted and killed as they tried to force their way into a mosque on the outskirts of Maiduguri, Borno State capital, the Police have said.

In a statement by the Public Relations Officer of the Borno State Police Command, Victor Isuku, “At about 0520hrs today (Saturday), two female suicide bombers with improvised explosives device strapped to their bodies attempted to enter a mosque at Juddumuri village, after the Federal High Court. 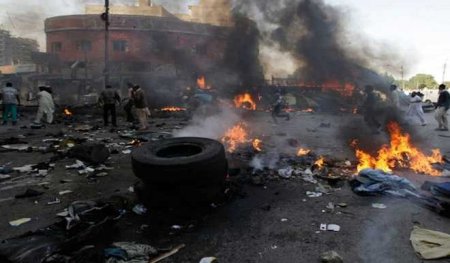 “They were intercepted and prevented by the Muslim worshippers. In the process, one of them detonated her vest, killing both of them and injuring five other persons.

“The injured were rushed to the State Specialist Hospital, while the remains of the suicide bombers were evacuated by the State Emergency Management Agency.”

Isuku said another blast heard some moment later “was from the unexploded IED from the second suicide bomber, which was detonated by the command’s EOD team at the scene.
Share:
Facebook Twitter Reddit WhatsApp Email Link
[889]