For Sale - One Bedroom Executive Flat - Lagos (NGN37m)
✅ NEW - car park, swimming pool, 24 hours light/security and more.
Ad
Popular Rivers state comedian, Julius Agwu has disclosed that since he declared interest in contesting the 2015 governorship elections he has been getting invitations to join secret cults.

According CKN Nigeria, speaking on TRENDING a chit chat programme on HIPtv hosted by Toke Makinwa, Agwu said, he never believed such happens although he has been forewarned by his brother and friend Okey Bakassi who had once contested a House of Assembly seat in Imo State.

Reiterating his commitment to take over Rivers state from Rotimi Amaechi come 2015, Agwu said, "I am damn serious about this journey.I used my last show in Abuja to declare my intention and there is no going back on this". 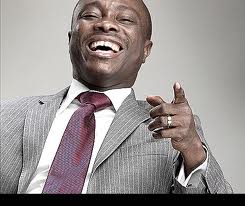 A
Politics Rivers 2015: Julius Agwu Says His Governorship Aspiration Is No Joke

Entertainment Cult Invitations: Fans Give Julius Agwu a Piece of Their Minds