According to PREMIUM TIMES, Gbemisola Saraki who is a former senator signified her intention to contest the Kwara state governorship election in February 2015 on the platform of the Peoples Democratic Party, PDP via a letter to the state chairman of the PDP.

Part of the letter read, "I have the pleasure to inform you that after several months of statewide consultations, I have resolved to contest for the position of the governor of Kwara State under the platform of our great party, the Peoples Democratic Party, PDP, in the 2015 General Elections". 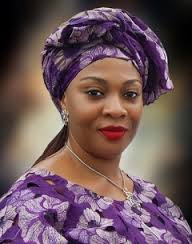