For Sale - One Bedroom Executive Flat - Lagos (NGN37m)
✅ NEW - car park, swimming pool, 24 hours light/security and more.
Ad
The Deputy Speaker, House of Representatives, Mr Emeka Ihedioha, said that he would ensure the enthronement of good governance in Imo, if he is elected as the state`s governor in 2015.

He stated this on Wednesday in Abuja while speaking with newsmen shortly after picking the Peoples Democratic Party (PDP) expression of interest and nomination forms to contest Imo governorship election.

Ihedioha, who said he had discharged his duties professionally and creditably in the legislature, said the day marked the beginning of his transition from the legislative arm to the executive arm.

He, however, noted that the challenges ahead of him in the executive were enormous and demanded tested and trusted hands liked him.

He assured the people that if elected, he would put Imo in the right direction by ensuring the enthronement of good governance in the state and by extension, complement the Federal Government's transformation agenda.

He said the All Progressives Congress (APC) government in Imo had failed the people, adding that a PDP governor under his leadership, would put things aright in the state.

"Every facet of life in the state today is in a regrettable and regressive state,’’ he stressed.

The deputy speaker said he would give priority to education and infrastructure development in the state, if elected.

He, however, expressed optimism that he would emerge as the next governor, considering his antecedent and credentials, which according to him, are outstanding.

"You know I have the track record, antecedent and credentials, the surprise will be if I do not do well,’’ he said.

Ihedioha was accompanied by PDP members in Imo House of Assembly and other party chieftains. Ihedioha had been in the house for over 11 years and had at one time served as Chief whip of the house before becoming its deputy speaker. 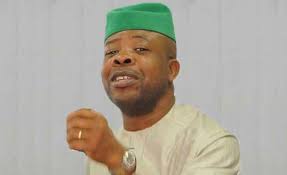 Politics HOW COME??? APC’s Hope Uzodinma Who Came 4th In Imo Election Is Now The New Governor – Who Can Explain This? – Naijaloaded

Politics Ihedioha: Why We Want S’Court to Reconsider Judgment – Thisdaylive