Politics 2019 Election: Fayose Is On His Own - Makarfi

The Chairman of the Peoples Democratic Party (PDP) National Caretaker Committee, Senator Ahmed Makarfi, has said that the present campaign mounted by Governor Ayodele Fayose of Ekiti State to vie for the 2019 Presidency is contrary to the decision of the party’s convention that zoned presidency to the North.

Makarfi stated this while addressing journalists in Kaduna

He said: “He (Fayose) is on his own. What he is doing is not in compliance with the position of the party. The party’s position has not changed.

“The convention has zoned the presidency to the North and the chairmanship of the party to the South.” 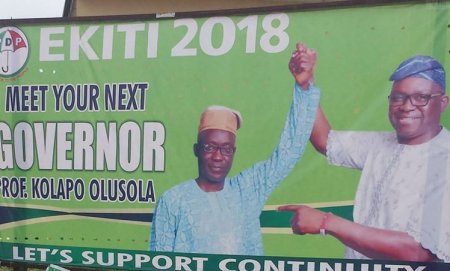 Makarfi also dismissed speculation that former Vice President Atiku Abubakar may be given an automatic ticket to contest the same position on the platform of the PDP if he finally decides to join the party before the 2019 general election.

It could be recalled that Governor Ayo Fayose said his decision to seek the PDP ticket to contest the 2019 presidential election against the Party’s zoning formula is without prejudice to our party’s position.
Share:
Facebook Twitter Reddit WhatsApp Email Link
[1318]
Show hidden low quality content