For Sale - One Bedroom Executive Flat - Lagos (NGN37m)
✅ NEW - car park, swimming pool, 24 hours light/security and more.
Ad
The Board of Trustees (BoT)‎ of the Peoples Democratic Party (PDP) has warned against any move to jettison the zoning of the party’s 2019 presidential ‎ticket to the North.

The BoT acting chairman, Senator Walid Jibrin told newsmen yesterday in Abuja that anyone who tried to reverse the position, which had already been approved by the National Executive Committee (NEC) would ever remain an “enemy to the north” and a “killer” of the PDP.

Senator Walid also said that the party’s national chairman, Senator Ali Modu Sheriff, must vacate office alongside other members of the National Working Committee (NWC) in May as approved by the various organs of the PDP. 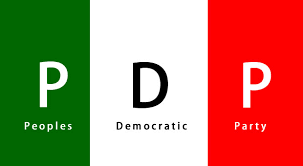 He said, “The present NWC received an overwhelming ovation and admiration at the meeting of the national caucus, BoT and NEC by overlooking their 2017 tenure in support of the three months approval of the respected organs of the party which should strictly be complied with. Instead of listening to the praise singers, Modu Sherif should follow the path of honour and integrity by simply taking a bow in May, 2016, after the national convention.

Politics PDP Speaks On Changing Symbol & Slogan Ahead Of 2019 – Naijaloaded