Three prominent associate of former President Goodluck Jonathan convinced and begged him to concede defeat to President Muhammadu Buhari in the 2015 general election.

According to Segun Adeniyi's book, “Against The Run Of Play” said the trio of former Attorney-General and Minister of Justice, Mohammed Bello Adoke; former Aviation Minister, Osita Chidoka and a former Special Assistant to the President on Domestic Affairs, Warpamo–Owei Dudafa, encouraged the president to make the call to Buhari, congratulating him on the electoral victory.

Adeniyi wrote: “The drama unfolding at the Villa on March 21, 2015, four days after the presidential election, would have profound implications for President Jonathan and the nation he led. “Kneeling in front of Jonathan were his Attorney-General and Justice Minister, Mr Mohammed Bello Adoke; Aviation Minister, Mr Osita Chidoka and the Special Assistant to the President on Domestic Affairs, Mr Warpamo–Owei Dudafa. 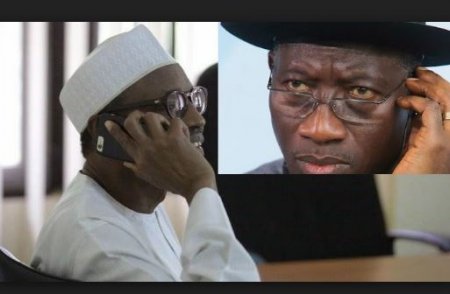 “The mission of the three officials was to persuade Jonathan to call and congratulate his opponent, Major-General Muhammadu Buhari of the All Progressives Congress (APC), even as the final results were still being collated by the Independent National Electoral Commission (INEC). “Seated a few metres away in the room were Vice-President Namadi Sambo; Akwa Ibom state governor, Mr Godswill Akpabio; Executive Secretary of the Nigerian Christian Pilgrims Commission. Mr John Kennedy Opara and the Coordinating Minister of the Economy, Dr Ngozi Okonjo-Iweala. “Chidoka had co-opted Adoke and Dudafa to make the plea after a conversation he had with Jonathan the previous day. The president had acknowledged that the results were going against him and that he was going to concede. This was at a period when Nigerians were unsure of who would win, with many politicians within the then ruling PDP still betting on Jonathan.

“He had already asked Chidoka and a few others, including his spokesman, Dr Reuben Abati, to give him a draft concession speech.”

Politics Atiku to Buhari: Be like Jonathan, concede defeat if you lose – Pulse Nigeria News