For Sale - One Bedroom Executive Flat - Lagos (NGN37m)
✅ NEW - car park, swimming pool, 24 hours light/security and more.
Ad
The Uruguayan striker bagged a double, with Neymar and Andres Iniesta also on target as Luis Enrique's side ran riot at the Bernabeu on Saturday

Barcelona romped to a dominant Clasico triumph on Saturday as two goals from Luis Suarezinspired them to a 4-0 thrashing of Real Madrid at the Santiago Bernabeu. 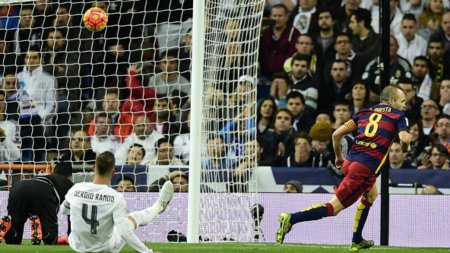 1. Iniesta isn't cooked yet -- At age 31, with over 700 games on his legs and some occasional poor performances over the last couple of years, you can be forgiven for thinking that Andres Iniesta is in decline. But he showed up everyone on Saturday, turning in one of his best performances of the post-Pep era. This was vintage, 2011 Iniesta.

2. Sergi Roberto is the hard-nosed utility man Barca didn't know they needed -- Barcelona's transfer ban has turned out to be a blessing. Without it, they might not know that La Masia had produced a guy who can play right back, defensive midfield and attacking midfield, and offer Barca the same ball-retention and ball-winning qualities at all of those positions. Roberto is having a great season, and he outplayed Luka Modric and Toni Kroos in this game. 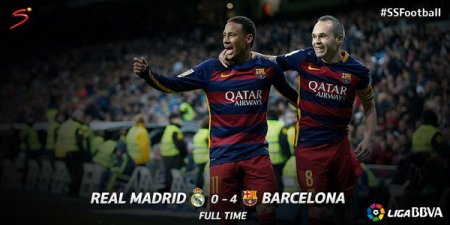 3. Cristiano Ronaldo was butt -- It's hard for a forward to do much when their midfield is getting blown up, but this was a total non-performance from Cristiano. His team needed him to get them back into the match after Suarez's goal, when it could still go either way, and he didn't deliver.
L

@ese you can gloat. It's your day today. Barca was lucky. Simple.
E

Lequte said:
@ese you can gloat. It's your day today. Barca was lucky. Simple.
Click to expand...