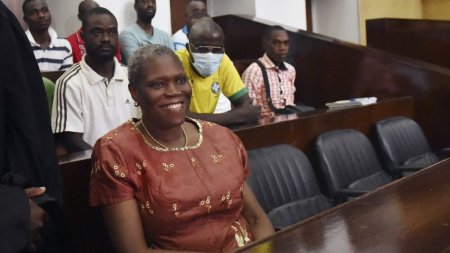 66-year old wife of former Ivorian President, Simone Gbagbo yesterday attended the opening hearing of her trial on charges against humanity for her alleged role in the 2010 electoral violence in the country. This was at the courtroom of Abidjan on Monday.

The “Iron Lady” is already serving a 20-year sentence after being convicted last year of “attacking state authority” in connection with sweeping violence after the 2010 election that her husband, Laurent Gbagbo lost to the country’s current leader Alassane Ouattara. The unrest left more than 3,000 people dead.

A prosecutor in the trial of Ivory Coast’s former first lady for crimes against humanity said Tuesday it was fair and transparent, after the defence said the jury was biased.

A trial date of May 31 was announced Monday during a hearing in the financial capital Abidjan which took place several weeks after a court rejected her appeal to have the case dropped.

Laurent Gbagbo however is on trial at the ICC for war crimes also related to the unrest that followed his refusing to step down after the vote.

Ivory Coast, the world’s top cocoa producer, has struggled to return to normalcy after years of civil war, which effectively divided the country between the mainly Christian south and the largely Muslim north.

Ouattara finally took power in 2011 with help from former colonial ruler France and the arrest of the Gbagbos. The 74-year-old was re-elected to a five-year term in 2015.

And in a further sign of the West African country bouncing back from turmoil, the UN Security Council last month lifted the remaining sanctions on Ivory Coast and said it would shut down its peacekeeping mission there next year.