A coalition of Niger Delta militants has insisted that Northerners living in the region should leave, despite Acting President Yemi Osinbajo’s warning against hate speeches and threats. 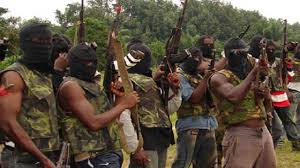 In a statement released on Thursday, the militant groups lamented that none of the leaders of the northern groups that issued the quit notice to the people of the South-East living in the North had been arrested.

“All oil and gas companies operating in oil bloc(s)/well(s) illegally owned by northerners should also vacate such oil blocs/wells/platforms before October 1, 2017.

Oh Biafra!
Be calm!
Cos the succour will come
When the gospel in their mouth
Pinch me so I come out from
The dreamworld.
Keep mute
Those martyred
At work
The hands that planned it
Their ears
Their eyes
Their throats
Their memories
Useless and
Burden to the
Body.
Biafra, slowly
It comes.
The peace
She loves
Loves her.