9 Reasons Why Nigeria's 8th Assembly Is A Joke!

The recent trend of happenings in Nigeria's political space has left everyone to conclusively say the country is a joke! Especially with the law makers, ever since the inauguration of the 8th Assembly in June 2015, the National Assembly activities have been marred with a lot of flaws than praises. These do not mean well for a striving nation like ours. 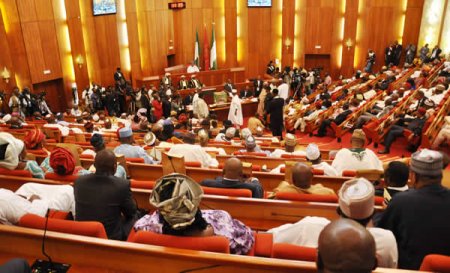 ----
1. Lazy Lawmaking: The Nigerian Senate on Thursday, 23 June embarked on a 17-day holiday. Senate President Bukola Saraki announced the resumption to be Tuesday 12th July, 2016. It would be recalled that in May 2016, the senate was shut, and adjourned plenary for one week to enable members of the Peoples Democratic Party, in the chamber, to attend the party congresses.

2. Hasty Passage of Bills: Nigerian Senate under the leadership of Dr. Bukola Saraki on Tuesday, June 14, began consideration to alter the 1999 constitution of the Federal Republic of Nigeria, passing 13 bills for second reading in seven minutes.

The decision was taken on the floor of the Senate during plenary as it was referred to the committee on constitutional review chaired by Ike Ekweremadu, the deputy Senate president. This seems to be the trend with the Nigerian Senate as it in June 2015 passed 46 bills into law in less than ten minutes under the leadership of Senator David Mark.

3. Purchased Expensive Vehicles: The Nigerian Senate under the leadership of Dr. Bukola Saraki purchased Toyota LXR V8 Land Cruisers for 36 of its 109 members. The vehicle cost N36.5 million for each. The move by the Senate leadership to acquire these exotic SUVs for senators drew the fury of Nigerians when former President Olusegun Obasanjo wrote a letter to the federal lawmakers in December. In the same month, President Buhari also faulted the move in his maiden presidential media chat. However, the lawmakers ignored the advice and went ahead to acquire the cars in April at twice the market price at the whooping cost of N36.5m each. This came at a time when the nation is battling with a terrible economy, and states' inability to pay their workforce. The reason for the purchase of these vehicles cannot be totally justified when these senators already have exotic cars.

4. A Divided House: A house that is divided against itself cannot stand. Just recently, the All Progressives Congress and Labour Party law makers in the Nigerian Senate passed a vote of confidence on President Muhammadu Buhari's administration. The Peoples Democratic Party senators vowed to discontinue cooperation with the APC-led Federal Government. With such a sharp divide in the nation's law-making body, this may spell doom when debating sensible policies.

5. Sex Scandal: Three Lawmakers have recently been alleged of a sex scandal in the United States, consequently leading to the canceellation of their visas to enter the country. The affected members – Mr. Mohammed Garba-Gololo (Bauchi State); Mr. Terse Gbillah (Benue State), and Mr. Samuel Ikon (Cross River State) – allegedly committed the act during a recent trip to the US to participate in the International Visitor Leadership Programme on Good Governance organised by the US Government. The US Department of State and the Cleveland Council on World Affairs says Mohammed Garba Gololo allegedly grabbed a housekeeper in his hotel room and solicited her for sex while Mark Terseer Gbillah and Samuel Ikon allegedly requested that hotel parking attendants assist them to solicit prostitutes. Though the alleged House of Representatives members have denied the allegation, telling the United States to present proofs but the allegation is disgraceful as it sounds for Nigerian lawmakers.

6. 'Fat' Wardrobe Allowance: A week after the inauguration of the Senate, reports had it that each of the 109 senators was given N506, 000 to fill their wardrobe with ‘senatorial attires’. The money was released at a time when many states were finding it difficult to pay workers’ salaries.

7. Protests “For” And “Against” Saraki: For days in April 2016, protesters held vigil at the entrance of the National Assembly, demanding Saraki’s resignation while another group insisted he must remain in office. The protesters demanding for his resignation spent 72 hours and three nights at the entrance of the National Assembly. The protesters hinged their request on the CCT trial and the purchase of exotic cars. Some other controversies also include the hire of 282 aides, increase in the number of standing committees from 57 to 65 without amending Standing Orders and the attempt to suspend Senator Kabiru Marafa (APC, Zamfara Central) over his utterances.

8. ‘Forging’ of Senate Standing Order: In July, the Senate was enmeshed in “forgery” scandal. It was alleged that its standing orders used for the conduct of the election that brought in Saraki and Ekweremadu as presiding officers was forged. To this effect, the outgoing Clerk to the National Assembly, Salisu Maikasuwa and others were grilled by the police. The police high authorities have since concluded their investigation and confirmed that the document was truly forged.

9. Emergence of Saraki: The emergence of Senator Abubakar Bukola Saraki (APC, Kwara Central), as the Senate President on June 9, 2015, in what was described as an “apparent disregard” to the directive of the All Progressives Congress (APC), laid the foundation of flaws that has enveloped the upper chamber. Saraki, a former governor of Kwara State, edged out Senator Ahmad Lawan (APC, Yobe North), the preferred candidate of the APC to clinch the Senate’s plum job, after allegedly resting on the strength of senators of the Peoples Democratic Party, (PDP). The alliance apparently paved the way for the emergence of Senator Ike Ekweremadu, (PDP, Enugu West), as the Deputy Senate President, a development that dealt a serious blow to the APC’s control of the upper chamber. The Senate President is currently facing trial at the Code of Conduct Tribunal over false declaration of assets.

E
Politics The fact that the national assembly roof was leaking is a clear testimony that the place is due for rehabilitation - Senate President, Ahmad Lawan