The All Progressives Congress (APC) has condemned the renewed plan by the Nasarawa House of Assembly to impeach Governor Tanko Al-Makura, saying the state lawmakers are bent on thumbing their nose at the Constitution in their desperation to remove the Governor, who has been cleared of the charges against him by a duly constituted impeachment panel.

In a statement issued in Ilorin on Sunday by its National Publicity Secretary, Alhaji Lai Mohammed, the party said it would amount to an illegality for the lawmakers to draft a pliant Vacation Judge, as it has been reported, to set up another panel to probe the same 16 allegations over which the Governor has been absolved of any wrongdoing.

It said the Constitution is clear that only the Chief Judge of the state can set up such a panel, upon receiving a request from the Speaker of the House of Assembly, hence any attempt to draft a Vacation Judge to set up another panel will mean working against the spirit and letter of the same Constitution that gave the legislature the impeachment power in the first instance.

APC also said Al-Makura cannot be impeached on the basis of the same allegations, noting that if indeed the lawmakers want to follow the Constitution, they will have to find a new set of alleged impeachable offences against the Governor, notify him appropriately and then forward their request to the Chief Judge, not to a Vacation Judge.

''That this latest move by the legislators, who are now marooned in Abuja instead of their base in Lafia, is being instigated by the PDP is not in doubt, irrespective of the unconvincing and tepid denial from the party. That this illegality is being contemplated under the watch of President Goodluck Jonathan is clear for all to see. In fact, it is in line with the culture of lawlessness and impunity for which the Jonathan Administration has now become infamous.

''This is the only reason why the Minister of Information, Mr. Labaran Maku, from Nasarawa State could be goading the state legislature to disregard the Constitution of the Federal Republic of Nigeria in its avowed determination to remove the Governor, for no reason other than he belongs to the opposition. The Minister is well aware that he is functioning in an atmosphere that encourages impunity, and that the President will not sanction him for encouraging illegality.

''It is also as clear as daylight that the kind of money being dangled at the lawmakers to impeach Governor Al-Makura at all costs could only have come from a deep purse or a war chest. With almost 30 million Naira and other perks being reportedly offered to each lawmaker just to take out an opposition Governor, it is clear in whose interest and at whose behest such is being done,'' the party said.

"It said that from Police officer Joseph Mbu, who trampled the Constitution and virtually seized the reins of government during his tenure as the Commissioner of Police in Rivers, to Marilyn Ogar, a supposed spokesperson of the DSS who has now become a spokesperson for the PDP, impunity is the name of the game under the Jonathan Administration.

''The puppeteers of the marooned Nasarawa legislators had better call them to order before they precipitate a Constitutional crisis in the state and do a grievous harm to our democracy. The lawmakers have tried and failed to remove Governor Al-Makura. Let them now return to Lafia and continue with their constitutional duties. They must give peace a chance,'' APC said. 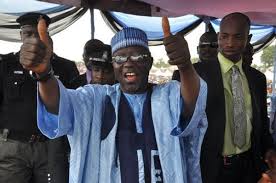