Governors elected on the platform of the Peoples Democratic Party, PDP have ganged up against Nuhu Ribadu, former Chairman of the EFCC and one of the party's governorship aspirants in Adamawa.

PUNCH reported that on Monday night some PDP Governors met at the Akwa Ibom State Governor’s Lodge in Abuja to discuss Ribadu's candidacy.

One of the Governors who allegeddly spoke anonymously said it would be dangerous for the PDP to field Ribadu as the party’s governorship candidate for the Adamawa State election .

"He can be uncontrollable and can explode anytime"

When asked if it would be better for Ribadu to be given a ministerial position since he has joined the PDP, the Governor said, "It is not ideal for the man (Ribadu) to come close to us at all. We still don’t know why Hassan Tukur is insisting on the man.

"We can’t trust him for anything. Look at the auditing job given to him concerning the Nigerian National Petroleum Corporation? Do you know the problem that report caused this government? .Before Ribadu submitted the report, he had leaked it to all the embassies in the country. Will it therefore not be wrong to have such a man close to the government he had denounced and condemned in the past?. 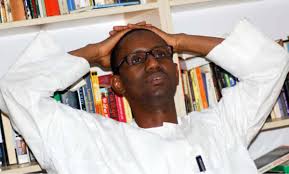 Poor Ribadu, other than the people on Twitter no body really likes him. I feel sorry for him sometimes, if i could vote in Adamawa i wouldn't even vote for him

I'm not even close to this game, but the way these men defect and suddenly embrace the ideologies of the other party in a heartbeat is a little creepy.

Then I remember - both parties have the same ideologies.
A

Vunderkind said:
I'm not even close to this game, but the way these men defect and suddenly embrace the ideologies of the other party in a heartbeat is a little creepy.

Then I remember - both parties have the same ideologies.
Click to expand...

Everybody/everything has an ideology, Jules.