World Africans are Lazy Fools, Only Good at Lovemaking and Thuggery - Donald Trump

The United States' business magnate, Donald Trump has expressed displeasure for Africans by referring to them as lazy fools only good at eating, lovemaking and thuggery.

Trump is also the republican Presidential torch bearer promised to deport all Kenya origin, Africans including president Barrack Obama as he illuminated how he plans to reconstruct America and restore its lost glory. 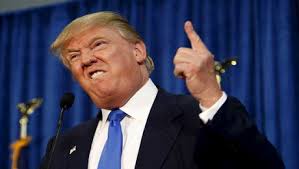 He explained bitterly that “African Americans are very lazy. The best they can do is gallivanting around ghettoes, lamenting how they are discriminated. These are the people America doesn’t need. They are the enemies of progress. Look at African countries like Kenya for instance, those people are stealing from their own government and go to invest the money in foreign countries. From the government to opposition, they only qualify to be used as a case study whenever bad examples are required. How do you trust even those who have ran away to hide here at the United States hiding behind education? I hear they abuse me in their blogs but I don’t care because even the internet they are using is ours and we can decide to switch it off from this side. These are people who import everything including matchsticks. In my opinion, most of these African countries ought to be recolonized again for another 100 years because they know nothing about leadership and self governance”

“I promise to make America great again by restoring our dignity that we have since lost through Obama. The more reason why I still believe that he, and his Kenyan brothers and sisters should be deported back to Kenya to make America safe”.
Share:
Facebook Twitter Reddit WhatsApp Email Link
[20835]
S

Donald Trump is a semi-illiterate and should endeavour to read up 'How Europe Underdeveloped Africa' by Late Walter Rodney.
Show hidden low quality content