For Sale - One Bedroom Executive Flat - Lagos (NGN37m)
✅ NEW - car park, swimming pool, 24 hours light/security and more.
Ad
Governor of Ondo State, Oluwarotimi Akeredolu, has started payment of workers’ salaries from the first month of his inauguration as civil servants in the state have received their salaries for the month of February.

Akeredolu, who inherited a backlog of seven months salary from the immediate past government, made a public declaration of his intention to make workers’ welfare a priority during the swearing-in of his administration on February 24, 2017 at the Akure township stadium. 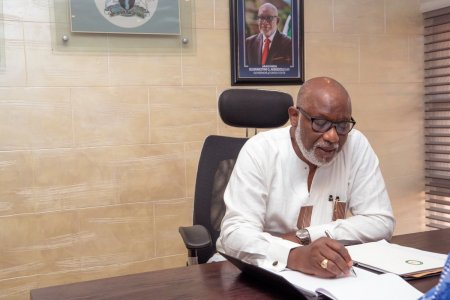 The governor authorised the payment of the workers’ salaries, beginning from that of February 2017.
Akeredolu, however, assured the workers of his administration’s plan to pay the arrears soon.

It will be recalled that a day after Akeredolu assumed office as governor, he set up a committee headed by the Accountant-General of the state, Albert Olaolu Akindolie, to work out the modality for the payment of the workers’ salary arrears.