For Sale - One Bedroom Executive Flat - Lagos (NGN37m)
✅ NEW - car park, swimming pool, 24 hours light/security and more.
Ad
A new campaign vehicle, adorned with the picture of the National Chairman of the Peoples Democratic Party (PDP), Sen. Ali Modu Sheriff, the colours of the party and its umbrella logo with an inscription describing him as a tested leader, was yesterday parked near the party’s national secretariat in Abuja, DailyTrust reports.

Besides Sheriff’s name and picture, the vehicle, which had no registration number, had the inscriptions “The Great Leader Sheriff 2016” and “The North-West Youth Organization: Sokoto, Zamfara, Kebbi.” 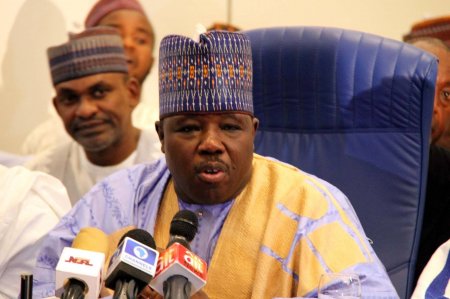 However, many passersby and some party members speculated that the car might have been brought to Abuja by Sheriff’s supporters from the North-West, who wanted him to remain as chairman beyond the stipulated three months tenure allotted to him by the National Executive Committee of the party.

This is coming five weeks to the party’s national convention slated for May 21, in Port Harcourt, Rivers State, where new leaders of the party, the National Working Committee (NWC), would emerge.