Politics Amaechi Cries Out, They Have “Heavily-Funded Plot” To Bring Me Down

Minister of Transportation Chibuike Amaechi described the latest allegation by Justice Sylvester Ngwuta as a lie and part of a “heavily-funded plot” to bring him down.

The minister, a former Rivers State governor, in a statement by his media office, said: “Justice Ngwuta’s allegation as it concerns Amaechi is nothing but pure fiction, a dubious diversionary tale concocted to muddle the very serious issues of his arrest and investigation by the Department of State Services (DSS).

The statement reads in part: “For emphasis, we want to state categorically that Amaechi did not and has never tried to lobby, induce or make the Justice Ngwuta to influence the outcome of any matter before the Supreme Court or any other court.

“The Hon. Justice Ngwuta’s narrative as it concerns Amaechi is simply not true, an unadulterated fallacy design to deceive and distract from the real issues of DSS investigation of acts of corruption against him. 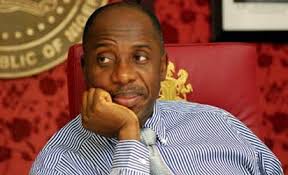 “Again, we make bold to state that Amaechi did not and has never lobbied, approached or attempted to make the CJN or any other Justice of the apex court to influence the Supreme Court judgment on the Rivers State and Ekiti State governorship elections petition appeals or any other matter before the apex court or any other court.

“Within a space of 48 hours, we have observed a carefully planned and coordinated political attempt to drag Amaechi into the DSS arrest and investigation of judges in Nigeria.

“The aim of the plot is two-fold: to smear and politically destroy the image and reputation of Amaechi, and deceitfully portray him as the person behind the arrest of judges. This is indeed most ridiculous and callous”.
Share:
Facebook Twitter Reddit WhatsApp Email Link
[6559]

Curators
smoke, smoke everywhere... I hope there will not be fire o

curator said:
smoke, smoke everywhere... I hope there will not be fire o
Click to expand...

There is FIRE already. How do we quench it becomes the talk of the town
Show hidden low quality content