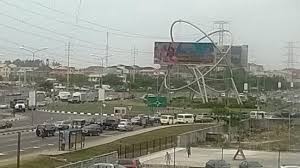 Ambode, who spoke at Lagos House in Ikeja when he received the management of Chevron Nigeria Limited led by its Chairman and Managing Director, Mr Jeffrey Ewing, said the roundabouts would be removed starting from next week, adding that the action was in line with the resolve of government to totally eliminate traffic in the axis.

The affected roundabouts, according to Governor Ambode, are Igbo Efon, Chevron and Third Roundabout.

“I also like to use this opportunity to say that because of the impact that we have seen in the elimination of roundabouts in the Lekki axis, we have actually approved another exercise and starting from next week, we will commence the elimination of additional three roundabouts in the axis most especially Chevron, Igbo Efon and Third Roundabout. We believe doing that will totally eliminate traffic in that axis and we hope to also open the Ajah Flyover before the end of May,” Governor Ambode said.

E
Metro No provision for 820 buses in budget I managed, says ex-commissioner on Ambode probe - The Cable