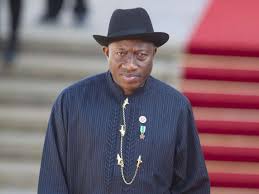 Jonathan's allegations are contained in a new book, “Against The Run of Play”, authored by the Chairman of ThisDay Editorial Board, Mr. Olusegun Adeniyi.

The book quotes Jonathan, “President Barack Obama and his officials made it very clear to me by their actions that they wanted a change of government in Nigeria and we’re ready to do anything to achieve that purpose. They even brought some naval ships into the Gulf of Guinea in the days preceding the election.

“I got on well with Prime Minister David Cameron but at some point, I noticed that the Americans were putting pressure on him and he had to join them against me. But I didn’t realise how far President Obama was prepared to go to remove me until France caved in to the pressure from America.

“But weeks to the election, he had also joined the Americans in supporting the opposition against me.

On why Obama was not confident in him, Jonathan said, “There was this blanket accusation that my body language was supporting corruption, a line invented by the opposition but which the media and civil society bought into and helped to project to the world. That was the same thing I kept hearing from the Americans without specific allegations.”
L

The can of canker-worms has been opened.
T

This is a lie
A

Taiwo Adeniyi said:
This is a lie
Click to expand...

Not necessarily, but this is nothing new. Every country has their candidates in elections. That is why it is important to get the backing of the right people.

Oct 5, 2020
Kenneth Chimaobi
K
K
Politics “I Did Not Hand Over A Collapsed Nation To Buhari” – Goodluck Jonathan Lists His Achievements – Naijaloaded