For Sale - One Bedroom Executive Flat - Lagos (NGN37m)
✅ NEW - car park, swimming pool, 24 hours light/security and more.
Ad
Call it the 'battle of the big boys', you're not wrong. The contest for the highest seat in Anambra state is getting intense already from APC political gladiators that want to slug it out at the party primaries. This is so because so much has happened in both All Progressives Grand Alliance (APGA), the ruling party in the state and APC, the ruling party at the centre to confirm that this year’s governorship race in the state is poised to be even more intriguing than the 2013 edition.

Three of the frontline heavyweights that made appreciable impact during the hotly contested primaries ahead the November 16, 2013 race, like the former governor of the state and now serving Minister of Labour, Senator Chris Ngige, of APC, Sen. Uche Ekwunife, then of the Peoples Democratic Party (PDP) and Ifeanyi Ubah, then of Labour Party, are now in APC and are determined to pursue their governorship ambitions on the platform of the party.

Apart from these three, another influential APC leader from the state, the party’s National Auditor, Dr. George Moghalu, has, on the New Year’s Day made public his interest to contest for the party’s governorship ticket. 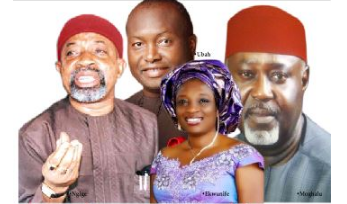 1. Senator Chris Ngige: Senator Chris Ngige, the former Governor of Anambra State and now Minister of Labour, is unarguably one of the most influential politicians in both Anambra State and the South-East zone today. Although his tenure as Governor of Anambra State on the platform of PDP was cut short midway because of the controversies over his relationship with some powerful political godfathers who allegedly rigged the election to install him as governor, he has remained very influential even though all his efforts since then to return as the executive governor of the state have failed to yield positive result. On November 11, 2015, he was named the Minister of Labour and Employment by President Muhammadu Buhari. Ngige wants to return to the government house in Awka, except he is assured of retaining his present position at the federal cabinet, it would be difficult to stop Ngige from contesting the coming governorship election.

2. Uche Ekwunife: Another influential politician believed to be interested in the governorship ticket of APC in Anambra State is Senator Uche Ekwunife. Considered to be one of the most dogged female politicians in the country today, Ekwunife is essentially, a grass roots politician. A former banker, Mrs. Ekwunife is well experienced in Anambra State politics where she had participated in many contests before she won the 2015 senatorial election.

But for dumping her party, her election was challenged and in December 2015, her seat at the Red Chamber was declared vacant.

Now a staunch member of APC, insiders said her well coordinated grassroots political machinery is set to commence campaigns soon. If she joins the race, the APC primaries will become even more intriguing as she enjoys widespread support and love.

3. Ifeanyi Ubah: When the oil merchant first joined politics and showed interest to govern Anambra State on the ticket of relatively unpopular Labour Party in Anambra in 2013, not many took him very seriously. But his well oiled campaign train moved like a whirlwind and shook the very foundation of Anambra State’s political theatre.

Although he was not given a chance, because of the profile of the political platform he chose to contest with, the LP gubernatorial candidate made a good show, when he polled 37495 votes to come third behind the ruling party, APGA and PDP. He later dumped LP for the PDP in 2014.

If Ubah made impact in 2013 on the platform of LP, observers say he is likely to do better today if he succeeds to get APC ticket. This is because APC, according to some sources, has become even more popular and acceptable in the state.

Aside the acceptability of the party, Ubah’s success story in the field of sports, especially the growing popularity of his FC Ifeanyi Ubah, among youths and football fans, will help his campaign. Ubah is determined to contest for the governorship seat. It however remains to be seen how far he will take advantage of his investment in sports and humanitarian activities.

4. George Moghalu: Another influential hopeful for the ticket of the All Progressives Congress (APC) is the party’s National Auditor, Chief George Moghalu. The party chieftain is also not a push over in the quest for the party’s governorship ticket in Anambra. Known to be very popular and influential in APC at the centre, Moghalu is also an experienced politician.

He chose the first day of this election year to formally declare his interest to join the race, even as he told reporters of his preparedness.

In an attempt to justify his envisaged candidacy, Moghalu, who is from Anambra South Senatorial District, said it was the turn of his zone to produce the next governor of the state, explaining that “Equity is about fairness. Anambra South zone did one tenure of four years under Mbadinuju and the position moved to Anambra Central, which occupied the position under Peter Obi and our leader, Senator Chris Ngige for 11 years.

“After 11 years, it moved to Anambra North zone. Governor Obiano would soon complete the zone’s four year tenure. Equity and fairness require that the slot should come back to the south district to do another four years before it becomes the turn of any other zone. That is equity; that is fairness; that is good conscience,” he said, boasting that he will defeat the incumbent governor even in his (the governor’s) village.