Six communities in Anambra State are overwhelmed with joy as the state government has officially handed over to their traditional rulers their Certificates of Rulership.

Some of the communities are those whose leadership crumbled due to crisis, as well as those who are without rulers due to the demise of their traditional rulers. 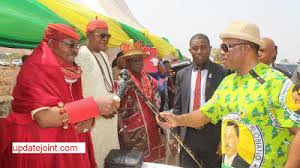 Handing over the certificates to them at the Governor’s Lodge, Amawbia, Governor Willie Obiano, charged them to rule with honesty and compassion having scaled through the conditions enshrined in the law guiding the institution as provided by the Anambra State House of Assembly.