Governor Willie Obiano of Anambra state has honoured nine members of the 2013 Batch ‘C’ National Youth Service Corps (NYSC) with awards for their outstanding performance during the service year.

The nine NYSC members were among those who completed service and passed out on Thursday.

The awardees were selected from the 25 NYSC members shortlisted based on the individual Community Development Projects executed in their various places of primary assignments in the state.

Presenting the awards in Awka, Obiano commended the NYSC members for their contributions to national development.

He urged them to continue to make worthy contributions to nation-building, saying "this is the time for you to apply the knowledge and skills you have acquired from your various institutions and experiences during the service year.’’

The governor advised them not to allow their contributions to end with the completion of their service year as there were more areas their services were needed.

In her address, the state’s NYSC Coordinator, Mrs Bassey Ekpe, said 1, 885 members of the 2013 Batch ‘C’ were discharged from the service.

She, however, added that three members died during the service year; two lost to accident while the other died of natural sickness.

Ekpe commended Obiano for donating N500,000 to the scheme in the state. 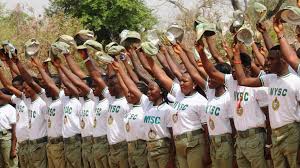