Android 5.0 Lollipop: Everything You Should Know

If you use Kitkat, you should be pretty expectant.

In June, during the Google I/O developer event, Google previewed the 'Android L' and since then we have been awaiting the final version. This was announced as the Android 5.0 Lollipop on Wednesday.

The lead devices for the Android 5.0 Lollipop are the Nexus 6, Nexus 9 and Nexus Player.

According to NDTV, "We saw the revamped navigation and status bar in the Android L preview, and Google has stuck to the design but now the status bar can be coloured or kept transparent (depending on the app) and features refreshed status icons. The 'Quick settings' menu has also been revamped, and includes new controls like flashlight, hotspot, cast screen controls and more. Also new is the toggle for location services. The recent apps menu or task switcher now appears like a stack of cards instead of a list of screenshots of recently open apps."

The Android 5.0 screen, we hear, has richer notifications, and users can now view and respond to messages from the lock screen. There are now rich floating descriptive notifications on top f your activity, too, so you can now review or dismiss notifications without having to leave your activity. 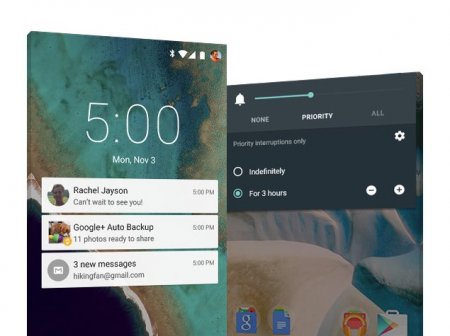