Politics APC Bribed Tribunal With N23b To Displace Me - Wike

Nyesom Wike, whose election was annulled by the Rivers State Governorship Election Petition Tribunal in Abuja last week has alleged that N23 billion bribe was paid to the tribunal judges by the All Progressives Congress (APC) to nullify the election of all South-south state governors, all of whom are members of the Peoples Democratic Party. 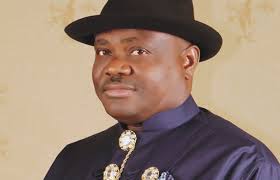 On his Facebook wall over the weekend, he wrote “Election petition tribunal was directed to nullify the election of all South-South state governors. A total of N23 billion was paid to the tribunal judges by APC. They are to pass the order that the election did not comply substantially with electoral guidelines and order INEC to conduct election within 90 days”.

“How can a party win all Senate seats, all House of Representatives seats, all State Assembly, 97% votes in presidential election and they could tell the public that the party did not win the governorship?

That's too costly a bribe for the court to admit those tangible evidences of impunity we saw.
Show hidden low quality content