There are indications that the crisis brewing within the All Progressives Congress Congress may lead to the suspension or expulsion of several prominent members of the party who are currently perceived as working against its interestIt was learnt that some of the prominent members including former governors may be shown the way out of the party if they continue to resist the take-over of the opposition party’s structures by the G-5 governors who recently defected from the People’s Democratic Party.

A reliable source within the National Secretariat of the party who spoke to Saturday Vanguard on condition of anonymity said the thinking within the leadership of the party is that the G-5 governors must be allowed to take over structures of the party in the affected states to enable them provide the funds to strengthen the APC for the 2015 elections.

The G-5 governors who defected from the PDP were Rotimi Amaechi of Rivers; Murtala Nyako of Adamawa; Rabiu Kwankwaso of Kano; Abdulfatah Ahmed of Kwara and Aliyu Wammako of Sokoto.. 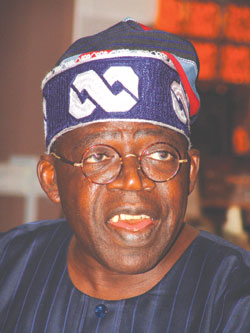