FREE Nigerian Business Directory
✅ NEW - get your business listed and your information shared across social media.
Ad
The Rivers State Chapter of the All Progressives Congress (APC) has called on Governor Nyesom Wike, to resign. 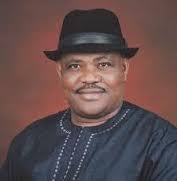 Rivers APC in a statement signed by the State Chairman, Chief (Dr.) Davies Ibiamu Ikanya said,
“It is now over two weeks since Governor Wike issued a seven-day ultimatum to the Federal Government to return the money to the Rivers State Government or be sued accordingly. Governor Wike had claimed that he has records, documents and facts to prove that the contentious $43m was kept by Amaechi.''

''Apart from Rt. Hon. Amaechi vehemently denying the accusation as one from the pit of hell; it is on record that Mr. Abayomi Oke, the suspended DG of the National Intelligence Agency, has claimed ownership of the money, thereby exonerating Amaechi.

“Wike’s failure to sue the Federal Government as he vowed to do is the height of his shameful theatrics and repulsive actions that have brought shame and public odium to Rivers State and her people. We, therefore, demand without equivocation, the immediate resignation of Wike as the Governor so as to save the good people of Rivers State further embarrassment.”

1.Tried to mislead the Senate to act on same non-existing fact.

2. Blowing a hunter whistle at a lunatic din on the floor of NGSenate.

Egwu(music). Instead of sitting down to work with the governor to forestall development in the state, he is busy trying to cover up in the favour of Amaechi. We all know the height of Amarach's involvement in PMB's victory in the 2015 presidential election.
O

We'll see how it goes

Base on logistics I, Ambassador Tochukwu urge APC to resign
E

Hahahahah. Based on logistics I laugh in swalhili
E

Ameachi is now a saint. I said it that the real corrupt leaders are sitting, dining and marrying with buhari.