FREE Nigerian Business Directory
✅ NEW - get your business listed and your information shared across social media.
Ad
Apostle Johnson Suleiman of the Omega Fire Ministries on Sunday addressed the sexual allegations leveled against him. 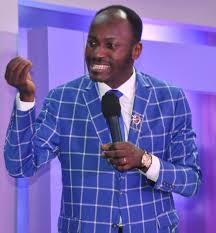 Preaching at the church’s headquarters in Auchi, Edo State he dismissed the claims as false, saying the truth will be exposed in twenty-four hours.

He said, “We don’t fight with our mouth we fight on our knees. You can’t do certain things and still carry the anointing we carry. No, we don’t do that nonsense.

“If I am true or not true, real or not real – twenty-four hours. I’m tough, you can’t bring me down.

“Don’t you see me preaching? Do I look worried? Get a better agent.

“You know why we ignore some people, we don’t want to make them popular. It’s normal, you cannot fight the devil and he keeps quiet. And if the devil wants people to start doubting you, he attacks your reputation. We know this, and they won’t stop, let me tell you the truth. One problem, because I said, ‘Don’t kill Christians’. That’s all I said, and you come out doing drama, acting movie. You should have least gotten somebody that people will believe… look for a presentable, not this… come on… I have travelled round the world, I’ve seen all kinds, is it that…?”