Ms. Okeke was previously named by Stephanie Otobo, Apostle Suleman’s estranged lover, as being one of the other women in his life.

For her part, the actress in 2016 proudly displayed the Mercedes-Benz SUV GL 450 on her Instagram page in front of a brand-new house where she parked it.

After her name was revealed by Ms. Otobo at a press conference, some Nigerians invaded Ms. Okeke’s Instagram questioning the source of her wealth given that she has not featured in any prominent movies in recent years.

The more inquisitive among them took advantage of a new website for vehicle registration in Lagos State which unveils the ownership of any vehicles by its number due to a bug on the webpage, and discovered that one of Ms. Okeke’s most prized possessions, the posh Mercedes-Benz car, is registered to “Apostle Suleman Johnson.”

This discovery is the second window into the pastor’s private life following the one opened by Ms. Otobo, but he has vigorously denied the amorous relationship she claims to have had with him.

See proof below as posted by SaharaReporters: 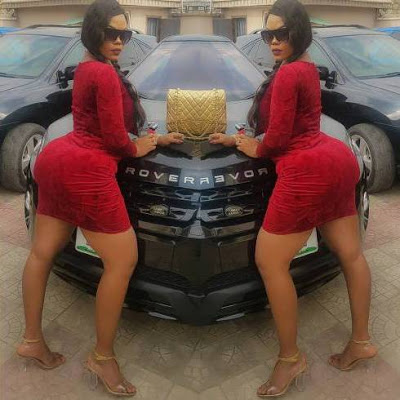 He he... Apostle is a generous man. Be Like Apostle.

If Apostle, TB Joshua, pastor Chris and the rest of them buy me a car I will gladly collect it Even if they ask for a relationship I will agree join, so no be Suleman start am. I beg make una leave the matter to God to handle. He get girlfriend no mean say he no be man of God or that he's fake. LET HIM WHO IS WITHOUT SIN BE THE JUDGE.

Because Suleiman spoke out against killings in southern Kaduna, short el-rufia and his Sahara reporters are now trying to black mail this man of God. That's a shame
D

They should leave the man alone besides his wife had never complained.
D