Curators
FREE Nigerian Business Directory
✅ NEW - get your business listed and your information shared across social media.
Ad
Super Falcons forward, Asisat Oshoala, has become the latest Nigerian footballer to move to the Far East, after she completed her transfer from Arsenal Ladies to Dalian Quanjian in China. 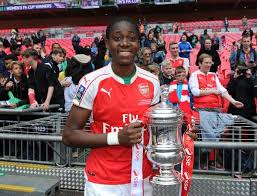 The 22-year-old failed to report for pre-season training with the English club, prompting speculations she was set to move.

Oshoala, who signed for Arsenal Ladies in January 2016, will reportedly earn four times in China.

The reigning CAF African Women Footballer of the Year claimed the transfer only existed in the imagination of the reporter.

“I’m 100% at my club, Arsenal Ladies, I do not know the source of the report that I’m moving to China,” she told SuperSport.

“I’m 100% Arsenal Ladies nothing more than that I’m on a break in Nigeria, a longer break after a major championship, Africa Women Cup of Nations in Cameroon.”

Oshoala won the Women’s FA Cup with Arsenal Ladies during her first year with the club.