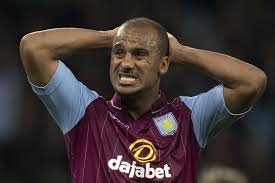 According to media reports, the 29-year-old was pictured with laughing gas canisters while partying in London on the same night Villa were relegated.

Agbonlahor was already on the sidelines after being told he was not fit enough.

Villa were relegated from the Premier League after losing 1-0 to Manchester United at Old Trafford on Saturday.

They are bottom of the table after collecting just 16 points from 34 games.

The West Midlands outfit are also without a manager following the sacking of Frenchman Remi Garde and have been hit by two key resignations.

Former Football Association chairman David Bernstein and Lord King, a former Governor of the Bank of England, both quit the board on Monday.
You must log in or register to reply here.

May 12, 2014
Titilope Adeuja
T
B
Sports I will choose three points over my wife's £54 million lottery ticket- Tim Sherwood