ASUP, COEASU Warming up for Another Strike

Workers in polytechnics and Colleges of Education nationwide have alerted the federal government of plans to resume its suspended strike following government refusal to resolve the issues that led to the eight-month-long strike it called off recently, LiveSchoolNews reports.

The General Secretary of Non-Academic Staff Union of Educational and Associated Institutions (NASU), Mr. Peters Adeyemi, who hinted of a looming strike at the National Executive Council (NEC) meeting of the union in Ilorin, Kwara State, lamented that government had not taken any concrete action to resolve the issues of industrial dispute 10 weeks after the suspension of the industrial action.

“You are aware that 10 weeks have gone and nothing has happened. At the end of 12 weeks if nothing happens we will go back to our members and other unions to take a position on the issue.

“We are going to deliberate on this issue in our NEC meeting after which we will communicate to our members and other unions. Do not forget that it is not a struggle of NASU alone as there are other unions involved and we must join position on this issue,” he said.

Speaking also, President of NASU, Mrs. Ladi Iliya, said it was imperative for government to act speedily in order to avert the resumption of the suspended strike, adding that workers are already warming up for another round of industrial action.

She noted that in the polytechnics where CONTISS15 migration had been implemented, some management had stopped the payment under the pretense that the federal government has not provided the needed funds for its implementation, LiveSchoolNews says.

“We are using this opportunity to call on the Education Minister to accelerate action in resolving the issues that provoked the strikes. It is imperative for government to act speedily in order to avert the resumption of the suspended strike,” she added.

She further called for government to constitute negotiating teams to renegotiate the 2009 FGN/NASU agreements for polytechnics and Colleges of Education as provided in the relevant sections of the agreements. 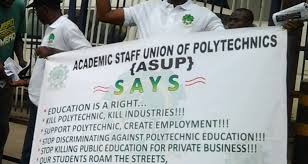 Metro Why ASUP strike may linger till 2019 – Newtelegraph

Politics No going back on strike, ASUP tells FG – The Guardian Nigeria Newspaper