The Australian priest who tried to negotiate the release of the over 200 Chibok girls abducted by Boko Haram,says he will in due course name ‘bigger sponsors’ of the sect.

Dr.StephenDavis who has already named former governor of Borno state, Senator Ali Modu Sheriff, and former chief of army staff, Gen. Azubuike Ihejirika, as backers of the sect told the on-line publication ,The Cable,that the sponsors “epitomise all that the Boko Haram fighters are seeking to eliminate from Nigeria.”
He dismissed insinuation that Boko Haram commanders named the All Progressives Congress (APC) as their sponsor.

“ I have been in close contact with the Jama’atu Ahlis Sunna Lidda’awati wal-Jihad (JAS) and Boko Haram over several years. In that time, I have never heard any political party mentioned by any Boko Haram leader as funding or being associated with Boko Haram,” he said. 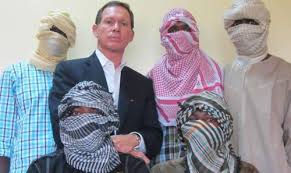