For Sale - One Bedroom Executive Flat - Lagos (NGN37m)
✅ NEW - car park, swimming pool, 24 hours light/security and more.
Ad
AY, Nigeria's top comedian (born Ayo Makun) known for his popular AY Show has set all mechanisms in place to ensure a successful premiere of his first movie, '30 Days in Atlanta,' which has been scheduled for a cinema premiere on October 30, 2014 in Nigeria.

The movie brings to life one of Nigeria's most popular fictional comic characters 'Akpos;' whose name has become synonymous with pranks, jokes and general comedy.

Interestingly, the movie, which was directed by Robert Peters and produced by AY recently picked up a Best of Nollywood (BON) awards 2014. 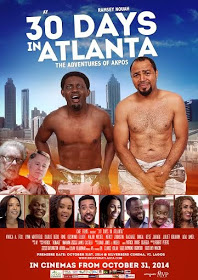 Sep 8, 2016
abujagirl
A
W
Entertainment AY Set To Premiere "30 Days in Atlanta" in Ghana This Month