FREE Nigerian Business Directory
✅ NEW - get your business listed and your information shared across social media.
Ad
The Ekiti state govvernor, Ayodele Fayose, has asked Acting President Yemi Osinbajo to release the probe panel report on the suspended duo of Babachir Lawal, secretary to the government of the federation, and Ayo Oke, director-general of the National Intelligence Agency (NIA).

In a letter written to the acting president which was dated July 11, 2017, Fayose threatened to ask the court to compel Osinbajo to release details of the report.

Lere Olayinka, the governor’s spokesperson, made the details of the letter known in a statement issued on Sunday.

The statement quoted the governor as condemning the manner the matter is being handled, adding that “both men (Oke and Lawal) should have been handed over the two men to the Economic and Financial Crimes Commission (EFCC) for investigation and arraignment

“Fortunately and unfortunately, President Buhari has been away on medical tourism for most part of this year and as the acting president, the buck now stops on your desk. Your Excellency, Nigerians demand two actions from you: First is that you release the report of the corruption investigation, which you presided over. Secondly is that you act expeditiously on the report,” the letter read. 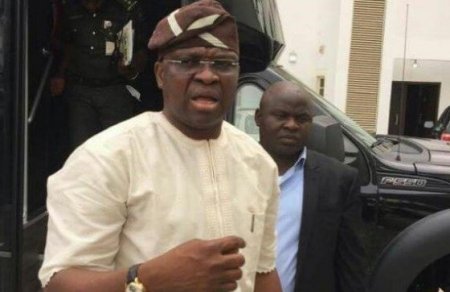 “May I advise, Your Excellency, that you should never habour the view that this matter can swept under the carpet for two reasons. One is that Nigerians are not unmindful of the outcome of your investigation even if it has not been officially released. Two is that should you fail to release the report and act on it, I shall approach the law court to compel you to do so.

“Your Excellency, as a Law professor and senior advocate of Nigeria, Your Excellency must not be associated with illegalities and cover-ups; not to talk of your highly exalted position as a man of God who must speak truth at all times and uphold the Biblical admonition to let justice flow like the mighty river", the statement reads in part.

Mr. Oke was suspended after his agency claimed ownership of the monies discovered in an Ikoyi apartment while Lawal was suspended over his indictment for corruption by the senate committee on the humanitarian crisis in the north-east.

A panel headed by Osinbajo was subsequently set up to investigate the duo.
M

Fayose has a point. Evans, Babachir, Oke..all swept under the carpet
You must log in or register to reply here.