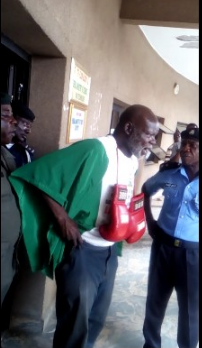 He was prevented by the minister's security aides who blocked the entrance to the office building.

The boxing champion who revealed that he is an Officer of the Order of the Niger (OON) refused to leave as he said he can't be prevented from seeing the minister who has 'nothing to his name.'

He also said that president Muhammadu Buhari must hear what is going on and that something must happen. He said either the minister leaves or he leaves.

Some policemen were also seen begging the boxing champion in a bid to calm his nerves.

Lol. He wants to box Dalung to death?
L

He's an ex-boxing charlatan champion. I'm wondering why he didn't BOX his way through the security aides to the Red Beret Minister.