FREE Nigerian Business Directory
✅ NEW - get your business listed and your information shared across social media.
Ad
Preliminary results released by the Independent National Electoral Commission (INEC) yesterday showed that Governor Seriake Dickson of the Peoples Democratic Party (PDP) is leading in the 6 of the eight Local Government Areas (LGAs). 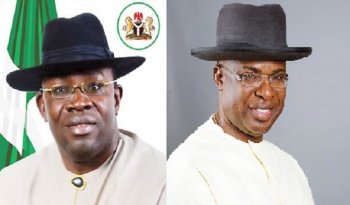 This is even as Dickson’s opponent, Chief Timipre Sylva of the APC alleged rigging. Bayelsa has eight LGAs. The poll was held last Saturday.

The rescheduled election was to hold in Southern Ijaw Local Government Area but a shoot-out between security agents and ex-militants stopped the exercise as voters scampered for their safety.

Also, Governor Dickson, had in a broadcast yesterday urged Bayelsians to resist any alleged rigging plot by the APC even as he raised a commission of enquiry to probe the atrocities perpetrated by government officials.

As seen of Sun Newspaper, the results collated so far;

Full Report HERE
Last edited: Dec 7, 2015
You must log in or register to reply here.