FREE Nigerian Business Directory
✅ NEW - get your business listed and your information shared across social media.
Ad
Donald Trump is the front-runner in the Republican race to be the presidential nominee for next year's election. What are his policies and beliefs?

1. Arab-Americans cheered the attacks on 9/11.Trump repeatedly claimed that on 11 September, 2001, there were thousands of Arab-Americans celebrating in New Jersey after two planes flew into the Twin Towers. He says such public demonstrations "tell you something" about Muslims living in the US, however there are no media reports to back up the claim.

2. There should be surveillance on US mosques. Trump believes Muslims should be tracked by law enforcement as a counterterrorism initiative. He has walked back some comments about keeping a database on all American Muslims, but says he doesn't care if watching mosques is seen as "politically incorrect".

3. The US should use waterboardingand other methods of "strong interrogation" in its fight against the Islamic State. The candidate said that these methods are "peanuts" compared to the tactics used by the militants, such as beheadings.

4. Trump would "bomb the hell" out of IS. He claims that no other candidate would be tougher on the Islamic State and he would weaken the militants bycutting off their access to oil.

5. Create a simpler tax code.Trump wants anyone who earns less than $25,000 (£16,524) to pay no income tax. They would submit nothing more than a single page tax form that reads "I win". He would lower the business tax to 15%. He would also allow multinational companies keeping money overseas to repatriate their cash at a 10% tax rate. 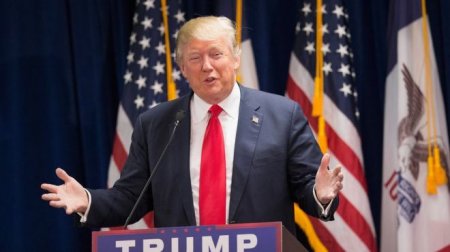 7. He wants to build a "great, great wall" between the US and Mexico. In some of his earliest campaign comments, Trump suggested that Mexicans coming to the US are largely criminals. "They are bringing drugs, and bringing crime, and they're rapists," he said. A wall on the border, he claims, will not only keep out undocumented immigrants but Syrian migrants as well. He also believes that Mexico should have to pay for the wall, which a BBC analysis estimates could cost between $2.2bn and $13bn.

8. A mass deportation of the estimated 11 million illegal immigrants living in the US should go into effect. Despite criticism that this idea is both xenophobic and prohibitively expensive - the BBC estimates $114bn - Trump says his deportation plan is as achievable as it will be humane. In addition, his immigration reforms would end "birthright citizenship", the policy that grants the children of illegal immigrants citizenship so long as they are born on American soil. He does not support creating a new path to citizenship for undocumented workers.

9. He and Vladmir Putin would "get along very well". In an interview with CNN, Trump said that Putin and Obama dislike one another too much to negotiate, but that "I would probably get along with him very well. And I don't think you'd be having the kind of problems that you're having right now".

10. In order to end mass shootings, the US should invest in mental healthtreatment. However, Trump does not believe that more gun control is the answer. In a position paper on gun rights, Trump revealed he has a concealed carry permit and that when it comes to gun and magazine bans, "the government has no business dictating what types of firearms good, honest people are allowed to own". He would also oppose an expansion of background checks.