For Sale - One Bedroom Executive Flat - Lagos (NGN37m)
✅ NEW - car park, swimming pool, 24 hours light/security and more.
Ad
Members of the Indigenous People of Biafra, IPOB, has threatened the federal government to resume its protest in the South East and South South states of the federation if by January 18, 2016, its leader and Director of Radio Biafra, Mr. Nnamdi Kanu was not released from the cell of Department of State Services, DSS. 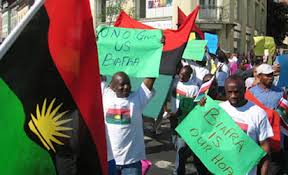 According to vanguard. the group alleged that apart from denying Mr. Kanu access to his doctors, the Federal Government through the DSS, has devised another way of complicating his already deteriorating health condition, by making him to sleep on bare floor, thereby making him to contract pneumonia, which may possibly kill him.