Curators
FREE Nigerian Business Directory
✅ NEW - get your business listed and your information shared across social media.
Ad
The Indigenous People of Biafra has said its leader, Nnamdi Kanu, is critically ill in Kuje prison.

The group said it got the information from Kanu’s lawyers who visited him recently. 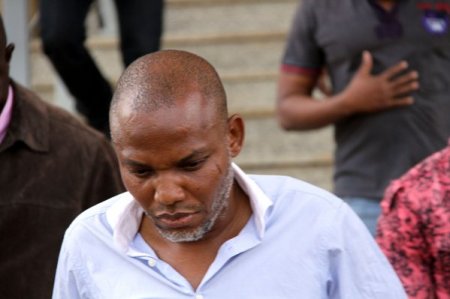 In a statement issued by the Publicity Secretary of IPOB, Emma Powerful, on Saturday, the group said Kanu was suffering from chest and abdominal pains as well as a violent cough.

The group alleged that Kanu’s poor health might not be unconnected with the bad treatment he had been allegedly subjected to by prisons officials.

The statement read, “We have notified the international community about his present condition which include debilitating abdominal pains and occasional tightening of the chest resulting in cough, which has persisted.

“The Department of State Services has this information in its record and we suggest it makes it public for the world to know. Kanu’s loss of blood through bleeding from the nose prompted the agency to send in an external doctor to examine him while in their custody.”

It called on the international community to prevail on President Muhammadu Buhari to allow its leader to have access to medical treatment.
You must log in or register to reply here.