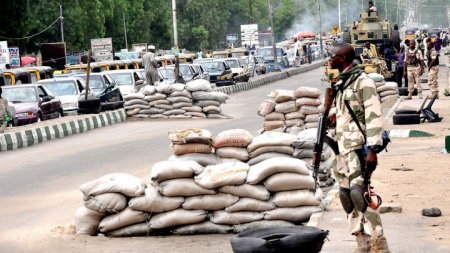 On Wednesday evening, two male suicide bombers detonated their explosives at a checkpoint in Dalori, a village on the outskirts of Maiduguri near a camp for internally displaced people, they said.

At the same time, other militants opened fire on the checkpoint, killing a soldier and injuring a policeman.

“We lost a soldier in the Boko Haram attack at Dalori Sector 3 checkpoint while a mobile policeman was injured,” said a military officer, who asked not to be identified because he was not authorised to speak on the incident.

The jihadists set fire to makeshift sheds at the checkpoint and carted away weapons during the attack, said Babakura Kolo, a civilian vigilante assisting the military in fighting the Islamist group.

He said the Islamists were later pushed back by a military reinforcement.

The attack caused panic in the village and nearby camp housing thousands of people who have been displaced by the eight-year insurgency.