The Camerounian government has deported 85 Nigerians, including 40 children, 32 women and 13 men, who fled Nigeria over the increasing attacks by the Boko Haram Islamic sect and had sought asylum in the country’s district of Mayo Tsanaga following a prefectural decree, cameroononline.org said.

The decision reports say, followed a government instruction requiring restriction of movement of people and goods from or to countries affected by the Ebola virus, and particularly Nigeria due to the risk of contagion of poliomyelitis and cholera which are among the prominent diseases the country is fighting against.

The expulsion also came as the Camerounian military is reportedly stepping up its offensive against Boko Haram terrorists who had killed many Camerounian soldiers during attacks in the northern border region of the country in recent weeks.

Combating the challenge of intense fighting on both sides of the border, the United Nations High Commissioner for Refugees has opened a refugee camp in Minawou in northern Cameroun, which currently hosts more than 11,000 people. 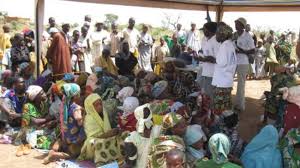