The hostages, including wife of Cameroon's Vice-Prime Minister, Amadou Ali, were flown to Yaounde from the country's far northern region after being freed early on Saturday and are reported in very poor physical condition.

They were seized in two separate raids in May and July close to the Nigeria border. It is not clear how their release was secured.

This raises hope that the Chibok girls kidnapped in Borno six months ago could be the next in line to regain their freedom from the terrorists.

Boko Haram is demanding for release of some of its members in exchange for the Chibok girls, reports say.

However, Nigeria's former president, Olusegun Obasanjo, recently said it'll be a miracle if the girls were eventually released.

Boko Haram is seeking to establish an Islamist state in Nigeria but its fighters often cross the long and porous border with Cameroon.

Many Nigerian civilians in border towns have fled to Cameroon to escape militant attacks, which have been stepped up in recent months. 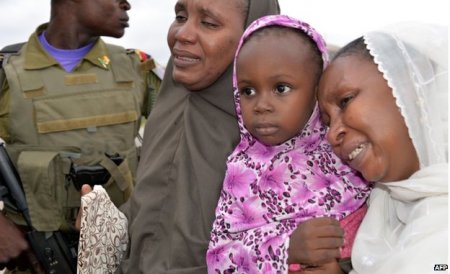