FREE Nigerian Business Directory
✅ NEW - get your business listed and your information shared across social media.
Ad
President Muhammadu Buhari has told a gathering that included Queen Elizabeth II of England and other Heads of State and Government participating in the Commonwealth Heads of Government Meeting (CHOGM) holding in Malta that terrorists had killed 10,000 Nigerians and displaced over 2 million internally.

A statement by his Special Adviser on Media and Publicity, Mr Femi Adesina, said Buhari spoke at a banquet hosted by Her Majesty, Queen Elizabeth II for participants in the meeting. 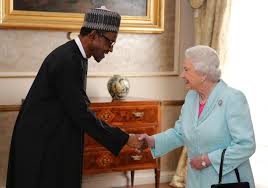 To stop these casualties, Buhari called for the establishment of a Commonwealth committee to oversee the rendering of greater assistance and support to Nigeria and other member-countries that had been adversely affected by the scourge of terrorism.

Adesina said Buhari expressed the hope that the committee would be established before the next meeting of the organisation.
You must log in or register to reply here.