FREE Nigerian Business Directory
✅ NEW - get your business listed and your information shared across social media.
Ad
Boko Haram terrorists set to be degraded permanently as some service chiefs have arrived in Maiduguri, the Borno State capital in line with the directive of the Acting President, Professor Yemi Osinbajo.

The Chief of Army Staff, Lieutenant General Tukur Buratai, was the first to arrive in Maiduguri among the service chiefs early on Tuesday 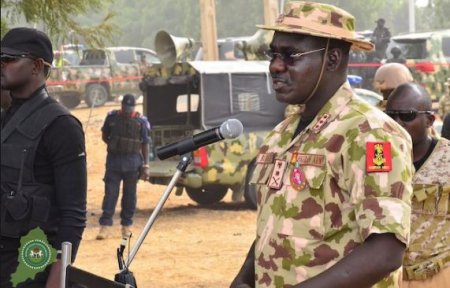 This was the outcome of a meeting the acting president held with the service chiefs, at the Aso Rock Presidential Villa in Abuja.

It was also decided that the military should get more surveillance devices and cameras that would be able to see distant attackers.

The meeting was attended by the Minister of Defence Mansur Dan-Ali, as well as Chief of Defence Staff Gabriel Olonishakin, Chief of Army Staff Tukur Burata, Chief of Air Staff Sadique Abubakar and Chief of Naval Staff Ibok Ekwe Ibas.
You must log in or register to reply here.